Having played Tauranga Boys College in each of the last four pre-seasons, and not yet registering a victory, although getting closer each year (0-1 loss in March 2018), we knew this match was not going to be any easier than our other six matches this week. Sensibly, both teams agreed prior to the match to shorten the match length to 60 minutes from the scheduled 80 minutes.

Fortunately, due to this year’s conditioning training led by Wally Rifle, we had 15 of our 16 players still fit enough to play our final match, with only L Yurisich, Thursday’s MVP for us, unavailable due to a foot injury suffered whilst celebrating our second goal in the win over St. Patrick’s Silverstream.

The match began unusually because the Tauranga Boys captain, due to his own broken foot, completed the coin toss, then was passed the ball from their kickoff, kicked it out over the sideline, and on his way to be substituted, received an ovation from both teams for having played for 5 years in their 1st XI. A nice touch by both teams!

Within 30 seconds, unbelievably, we scored from open play. From the throw-in, we retained and worked the ball over to our right side, progressed into their penalty box, had our first shot saved, but with the rebound finding M Sheed’s left foot and he expertly found the Tauranga goal for King’s to lead 1-0. I think we need to consider negotiating to start all our future matches in the same way!

However, this setback only pushed Tauranga’s players to find another gear and before long, we were under regular defensive pressure down our right side, with this soon leading to a goal being scored by them from a very narrow angle near our goal line. So, 1-1, with the score remaining the same at halftime.

We decided to make two player changes in the break to revitalise some very tired legs, with this leaving us with just one fresher outfield player plus goalkeeper P Maher, to enter the match later in the second half. The intention being for him to be fresh and come on as our goalkeeper if there should be a penalty shootout.

Both teams continued to create positive attacking moments, and from one of these inside our penalty box, a King’s defender had a difficult moment with a Tauranga attacker, who fell over, and unfortunately a penalty kick was awarded. J Pearson, our goalkeeper, dived positively to his right, saved the attempt and H Weston cleared the rebound over the goal-line. Jim Potts then proclaimed that, as Lady Luck was clearly on our side, a King’s victory would ensue.

As we got ever closer to the exciting penalty shootout to decide the winner of 5th place, our Year 10 goalkeeper P Maher warmed up, and with just 3 minutes remaining before full-time, we made the substitution. As a warm-up, he had to make one finger-tip save onto the King’s crossbar from a great Tauranga shot outside the penalty box before the 60 minutes were concluded. So, just as for the entire tournament, King’s would have to find another way to win, rather than relying on a goal from open play; but this time it would be via the Penalty Shootout.

TBC score 2-1, although P Maher gets his hand to the ball King’s J Williams scores 2-2

TBC score 3-2, although P Maher again gets hand to ball, but ball hits post and goes in King’s B Stephenson scores 3-3

What a win! What a tournament! 5th place in NZ out of best 32 teams. Senior A1 League Winners and undefeated.

After a fantastic week the girls ended up winning final against Botany College and taking out the Kathy Seaward Cup for 2018!

Both teams had a strong first half and held each other off from scoring to go into half time nil all. King’s came out strong in the second half and in the 38th minute Emma Hall stuck in a beautiful goal from a comer ball. Unfortunately, Botany followed through scoring a goal minutes later. The girls continued to play hard, but we couldn’t seem to break through Botany’s defence and find the goal. Whistle goes for full time – 1–1 draw.

The girls then went into 10 minutes extra time each way. Our strong defence held Botany out although we couldn’t quite break through their defence. With 3 minutes to go in second half of extra time the Grace Freeman and Maia Adamsswapped to prepare for Penalty Shoot Out. Whistle goes for full time – still a 1-1 draw.

Our girls then get a chance to regroup with the coach and go through the plan for the Penalty Shoot Out. The XI take the field and the shootout begins with Botany shooting first and King’s second. After the first three it is still a draw with 3/3 conceded shots each (Winter Brown, Emma Hall & Jemima Ferrier of our girls). Botany’s 4th player misses but as does Scarlett Hunter. Grace saves the 5th attempt and then misses her own attempt going over the top of the goal. Both teams start to work through the rest of their line-up. Grace saves Botany’s 6th attempt & Botany’s goalie saves Elena Wu’s attempt. Grace saves Botany’s 7th attempt & finally Carmel Uhila places a beautiful goal in the bottom left of the goal to win us the game!

Thanks again for all of the support. The girls have had such an amazing season and are so proud of their efforts.

The girls have worked their hearts out and only narrowly lost yesterday in the second lot of over-time to a penalty shot at goal.

Stella Rollo has finished as the 3rd = top goal scorer of the tournament, which is an awesome achievement amongst some great talent.

The 12th national placing is an improvement on our 16th finish from last year and sets us up in a good pool for next year’s tournament.

Thank you all for your support and words of encouragement for the girls. They have been overwhelmed by support from staff, parents and other students on this journey. 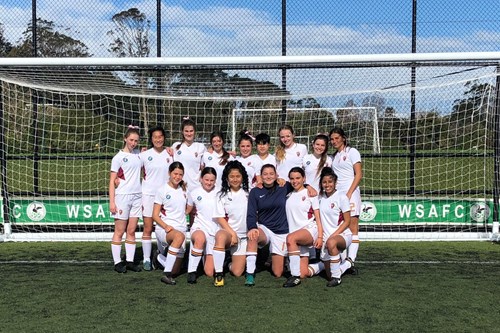 What a great way for our young 1st XI Boys to finish off their week. Bronze Medal defeating Hamilton Boys in the 3rd/4thplay offs.

Our preparation for the game was good and after a great team dinner last night the boys seemed to be over the disappointment of losing a close semi and gear up for today’s game.

We started off very tentatively and the boys showed some signs of nerves. Most of them hadn’t played finals hockey so it was quite nerve wracking initially.

Against the run of play Hamilton Boys took the lead when a hope full ball across the circle found and unmarked striker to tap into an empty net. 1-0. This spurred our boys into action and with only 5 minutes remaining in the first half and Hamish Burnett-Brown scored his seventh goal of the tournament finishing off a fine base line run by Sam Grenfell.

The second half saw our midfielders, Aiden Fraser, Sam Grenfell, Braden Jerram and Nick Wilson really step up and dominate proceedings. In the 10th minute, Aiden Fraser found Charles Cleal with a fine crash ball from the left. Charles Cleal finished the move off in style with a diving deflection to the roof of the net. 2-1.

Braden Jerram made one of his many forays in the second fine and threaded the needle to find an unmarked Charles on the top of the circle. Charles spun around in a flash and hit a cracking Tomahawk into the side let, past a hapless Hamilton Boys keeper. 3-1.

Some slack defensive marking in our defensive circle and Hamilton boys scored their second goal to give them a sniff. 3-2.

We kept up our intensity and kept attacking from the right. Hamish Burnett-Brown ran hard along the baseline and passed to Charles Cleal whose shot hit the defender’s foot on the goal line which resulted in a penalty stroke in our favour. Aiden Fraser stepped up and calmly slotted home the penalty stroke low to the keepers left. 4-2

Hamilton took off their keeper and Hamish worked hard to weave into the circle and earn another penalty stroke. This time Aiden’s flick was well saved by the keeper.

With only two minutes remaining we managed the game well in their territory to come away with an emphatic victory and a well-deserved Bronze medal.

We went through the tournament unbeaten in regulation time. It took a penalty stroke in extra time to deny us a place in the final. Speaks volumes of the way this team has played over the tournament

Please congratulate the boys on their effort when you see them at school. A big thank you to the staff for all your hard work. 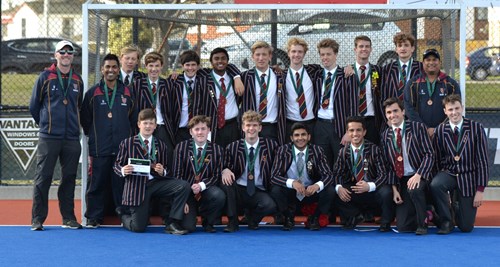 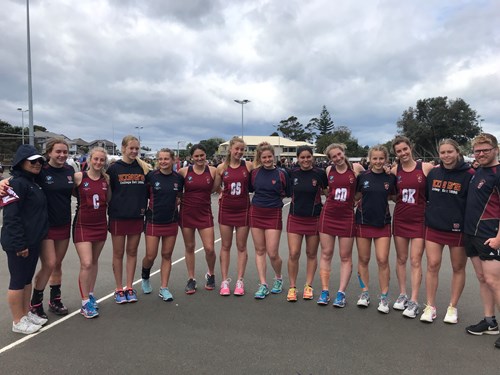 Back to News & Reports